Dataset 1+2 of the open competition contains recordings of 47 right-handed volunteers that provided 9477 equations overall. The task is to recognize single equations of unknown writers. Five labelled equations of each test-person can be used as adaptation set. Ground truths are complete equations (like 123+123=246), no character-segmentation is provided. 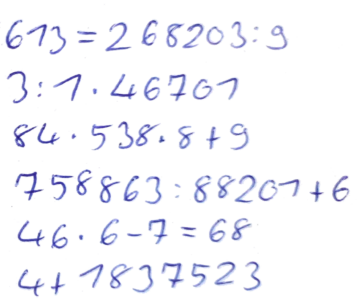 This is what you will be able to download after registering:

Additional info on the dataset:

To obtain the sensor data we provide for this challenge, we implemented a recording app that connects to a DigiPen and tells the volunteers which equation to write. These are some of the constraints that were met during the recordings:

This website uses cookies to improve your experience while you navigate through the website. Out of these cookies, the cookies that are categorized as necessary are stored on your browser as they are essential for the working of basic functionalities of the website. We also use third-party cookies that help us analyze and understand how you use this website. These cookies will be stored in your browser only with your consent. You also have the option to opt-out of these cookies. But opting out of some of these cookies may have an effect on your browsing experience.
Necessary Always Enabled
Necessary cookies are absolutely essential for the website to function properly. This category only includes cookies that ensures basic functionalities and security features of the website. These cookies do not store any personal information.
Non-necessary
Any cookies that may not be particularly necessary for the website to function and is used specifically to collect user personal data via analytics, ads, other embedded contents are termed as non-necessary cookies. It is mandatory to procure user consent prior to running these cookies on your website.
SAVE & ACCEPT